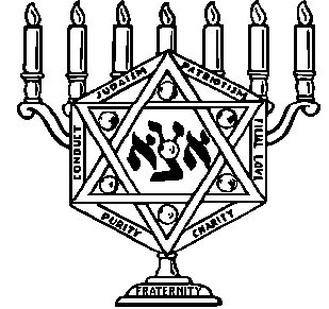 The organization that was to become the Aleph Zadik Aleph came together in early 1923. A group of Jewish boys in Omaha, Nebraska, organized a fraternity and named it the "Aleph Zadik Aleph," using Hebrew letters in the style of Greek fraternities, which often excluded Jews. The group elected Abe Baboir as their first president and chose a local chemist, Nathan Mnookin, to be their first advisor. AZA existed mainly as a local social group until Mnookin moved to Kansas City a few months later, where he founded a second chapter. The first chapter was without an advisor until it approached Sam Beber with a proposal.

Beber accepted the post under one condition: he told the young men that he envisioned the creation of an organization of Jewish fraternities that would stretch beyond the United States to encompass the entire world. Beber wanted the Omaha Jewish fraternity to be the starting point of his vision.

It was with this intention that Beber called a meeting on May 3, 1924. On this day, in the home of Harry Lapidus, the Grand Order of the Aleph Zadik Aleph came into existence. The original constitution and by-laws were drawn up, Mother Chapter AZA #1 was chartered, and a Supreme Advisory Council was established as the policy making body of the Order. Sam Beber became the Grand President of the Council and Nathan Mnookin became the Grand Vice President.

As a result of the hard work of this Council, the organization began to grow rapidly. Ninety-four members attended the first national convention in Omaha from July 4–6,1924. These 94 members constituted 2⁄3 of the total AZA membership, drawing from the first four chapters in Omaha, NE; Kansas City, KS; Lincoln, NE; and Des Moines, IO. The brotherhood exhibited between members at this convention became the single-greatest driving force in the success of the Order.

At the second national convention, Philip Klutznick was elected Grand Aleph Godol. A dynamic leader and renowned orator, Klutznick was hired as the first International Director of AZA at the conclusion of his term as Grand Aleph Godol. He brought the Order great prestige and launched The Shofar, the Aleph Zadik Aleph’s official newspaper. Klutznick maitained a strong connection to AZA as he moved forward as a leader in both the Jewish and general communities. He later served as President of B’nai B’rith, U.S. Ambassador to the United Nations, Chairman of the World Jewish Congress, and U.S. Secretary of Commerce during the Carter administration.

By 1927, AZA had grown enormously. Twenty-three chapters were represented at the third annual convention, held in St. Paul, Minnesota. Shortly afterward, AZA became a truly international Order with the establishment of First International AZA #31 in Calgary, Alberta. This rapid expansion led to the development of more thorough programming guidelines within the chapters.

In 1928, Dr. Boris D. Bogen presented his Five-Fold-and-Full Plan to the Supreme Advisory Council. A prominent leader in the American Jewish community, Bogen believed that AZA had a major role to play in preparing future generations for Jewish leadership and that this aim could best be met through a diverse and “full” program. His original plan consisted of religious, educational, social service, athletic, and social activities. While the five folds have been altered over time, the organization’s commitment to well-rounded programming has never wavered.

TIMELINE: So many important events and occurrences have happened since 1924 that a timeline structure is perhaps the best way to understand the gradual development of the AZA program into what it is today.

1923: Fifteen boys in Omaha, Nebraska form the Aleph Zadik Aleph. Abe Baboir is elected as the first president and Nathan Mnookin is the first advisor.

1925: AZA is adopted by B’nai B’rith International. The Shofar Newsletter is established.

1927: First district tournaments are held. These feature competition in oratory, debate and basketball.

1935: A free, circulating library created. Lapidus Memorial Forest came into being. The minimum age requirement of an Aleph lowered to 15. 1936: Karmen Chapter formed in Bulgaria. This was the first chapter to exist outside of North America.

1943: Minimum age requirement for membership reduced to 14 years. National convention elections and motions voted on by mail. Over $6,343,720 worth of bonds sold.

1948: AZA recognizes State of Israel ahead of independence.

1949: Silver Anniversary Ceremony for AZA. The organization reaches a 25-year milestone of service to the Jewish Community.

1974: AZA celebrates its Golden Anniversary. Fifty years of service to the Jewish community. Establishment of the International AZA Alumni Association. AZA and BBG members appointed to all B’nai B’rith Commissions.

1981: District level completely phased out within North America to be replaced with the regional level.

1989: Fifth Officer, Grand Aleph Shaliach added to the International Board.

1990: AZA and BBG send largest delegation on the March of the Living. First BBYO program held in Soviet Union with more than 200 Soviet Jewish teens in attendance.

1994: The International basketball tournament of old revived under a new name, the AZAA (AZA Athletics). BBYO Cheres Forest is established outside of Jerusalem. International Spirit Award and Chapter of the Year awards established.

1995: The Aleph Zadik Aleph International Board vote to change the Five Folds to increase the folds’ usefulness in the chapters. First Hungarian Leadership Institute established.

2002: BBYO transitioned to independence from B’nai B’rith International to become a new and legally independent organization under the name of BBYO, Inc. It is no longer officially recognized by its former full name, “B’nai B’rith Youth Organization.”

2006: AZA and BBG deliver 10,000 signatures to the White House to end nuclear proliferation in Iran.

2008: At International Convention, the My 2 Cents for Change campaign encouraged teen involvement in the 2008 Presidential election. 2009: BBYO’s Stand UP Campaign was launched.

2010: At August International Executive’s Conference, the “Speak UP for Israel” and “Stand UP for Each Other” campaigns launched; the Degrees of Programming were introduced; The International Service Fund was redefined for Globalization; the Global Ambassadors Network was created and the Coalition of Jewish Teen Leaders (CJTL) was motioned into action.

BY THE DECADESJust after the turn of the new millennium, many changes for the B’nai B’rith Youth Organization occurred. Our Order became a legally independent entity from B’nai B’rith International in 2002 and BBYO, Inc. was established as its official new name. Several leaders from the Jewish community, such as key Jewish philanthropists, BBYO alumni, Jewish Federation leadership, and BBYO’s International Teen Presidents (the Grand Aleph Godol and International N’siah), formed a new Board of Directors to assume governance over BBYO. While traditional summer programs such as CLTC, ILTC and Kallah continue to be offered, a new slate of Israel trips and community service programs grew extensively. In 2004, BBYO launched its international teen travel program, now called BBYO Passport, and restored its historical International Leadership Seminar in Israel (ILSI). The organization also created the BBYO Panim Institute, which offers premiere service learning opportunities open to members and non-members of BBYO. During this time, International Convention also left Camp Perlman for the first time in 50 years and convened at Camp Ramah Darom outside of Atlanta, GA in February 2006, and has been held in a different location every year since. Keeping with Aleph Zadik Aleph’s mission to provide a meaningful experience to Jewish teens of all ages, BBYO’s 6th-8th grade experience, now known as BBYO Connect, was reestablished in the 2007-2008 programming year. BBYO Connect positions BBYO as a ‘rite of passage’ for pre-high school teens, while promoting Jewish community involvement from pre-bar/bat mitzvah through the high school years.

In recent years, BBYO and the Aleph Zadik Aleph have encouraged our members to become involved with community service both in and out of the Jewish community. The 85th/65th (2008 – 2009) International Boards introduced Stand UP - BBYO’s service, philanthropy, and advocacy campaign. The 86th/66th (2010-2011) Executive Body ignited a renaissance of globalization – reconnecting BBYO worldwide and establishing new partnerships with twenty Jewish teen communities across the globe. The 2010-2011 programming year also yielded the introduction of “Speak UP for Israel”, BBYO’s campaign for Israel education and advocacy. The first decade of the twenty-first century redefined our Order. Sam Beber’s dream to provide a meaningful experience to Jewish teens has spread across the world and shows no signs of slowing down.