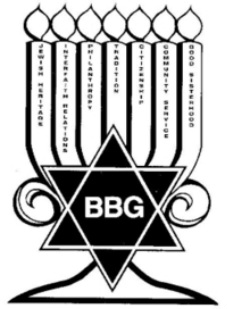 In 1925, a prominent Jewish organization called B’nai B’rith adopted the Aleph Zadik Aleph as its auxiliary program for young men. Efforts began immediately to launch a program for Jewish young women that would serve as a sister to AZA in the B’nai B’rith Family. New groups emerged as early as 1926 in Seattle, Washington and 1927 in Newark, New Jersey; unfortunately, these groups dissolved quickly.

However, the movement was not defeated, and efforts to create a sisterhood for Jewish young women continued. Rose Mauser organized the first permanent chapter of what is now BBG in December of 1927 in San Francisco, California. Mattie Olcovich and Essie Solomon served as the first advisors.

Unlike AZA, which began in Omaha in 1924 and then spread to become an international Order, chapters of girls sprung up throughout the United States and Canada in response to spontaneous local forces but without any central pattern of structure or policy and without professional supervision. “B’nai B’rith Girls” was only one name in a long list of names given to the early chapters. The age levels of the members also ranged anywhere from 12 into the 30s.

BBG chapter activities consisted mostly of programming that was modeled after the AZA “Five Fold and Full” program created by Dr. Boris D. Bogen in 1928. The emphasis was primarily on social and community service activities, with the inclusion of educational, religious, and recreational activities.

Due to the lack of an organized uniform structure, some of the young women’s chapters also adopted national AZA observances. As Regional and District associations began to emerge, BBG’s programming also developed a broader base.

The development of the girls’ groups was directly related to the strength of the B’nai B’rith Women (then also known as B’nai B’rith Auxiliaries). The women’s groups served as both a guide and support for the developing girls’ groups. The word “sister” was even adopted from the adult organization. Eventually, the women’s auxiliaries began sponsoring the Junior Auxiliaries by collecting dues from the girls for the operations of their programs.

The appointment of Anita Perlman as Chairwoman of the B’nai B’rith Girls was a major step in bringing structure to the loosely organized chapters. Though much dedication and hard work has gone into the building of the girls’ groups over a period of decades, no woman has put as much of herself into this work as Anita Perlman. Within the first year of her appointment, and with a $600 budget, she was able to keep up correspondence with the leaders of B’nai B’rith Women and BBG while developing invaluable program resources for the new group.

BBG was officially established as an international Order at a meeting held on April 22 – 23, 1944. A structure was defined at that time to include women from high school to the age of 25, but that system has shifted over time.

The individual identities of BBG and AZA have always thrived within BBYO. Both are very strong entities that have been bringing fun and meaningful opportunities to their members, both independently and together.

Timeline Dates:
1923: The first chapter of the Aleph Zadik Aleph was formed in Omaha, Nebraska.

May 3rd, 1924: The Aleph Zadik Aleph was officially declared an International Order by Sam Beber.

1925: The B’nai B’rith Organization adopted the Aleph Zadik Aleph as an auxiliary program for young men. Soon after, efforts began to launch a program for Jewish young women to serve as a sister program.

1926: The “Junior Auxiliary of B’nai B’rith Girls” was started in Seattle, Washington but disbanded shortly thereafter.

1927: The first permanent chapter of BBG was organized in San Francisco by Rose Mauser, with Mattie Olcovich and Essie Solomon as the first advisors.

1928: AZA “Five-Fold-and-Full” Programming was created by Dr. Boris D. Bogen. Most chapter BBG activities were modeled after this program with an emphasis on social, community service, educational, religious and recreational programs.

Spring 1941: The Women’s Supreme Council adopted the name of “B’nai B’rith Girls.” The age limit was set at 21, total membership at this point was about 7,000 girls.

1943: The AZA Supreme Advisory Council joined with the governing body of BBG to jointly run the Aleph Zadik Aleph and the B’nai B’rith Girls.

1944: Julius Bisno became the Administrative Secretary of the Youth Commission and Director of Boys’ Work. Beatrice Chapman became the Director of Girls’ Work.

February 1945: The First National Convention of the B’nai B’rith Girls was called to order by Anita Perlman. The Menorah was adopted as the official BBG symbol. Twenty delegates were present who represented all 7 districts. The Menorah Pledge, Opening Rituals, and other ceremonies were written. Frieda Tischler from Pittsburg was elected as the first International N’siah!

1955: The First Leadership Training Institute was planned. It was part of International Convention and it stressed Judaism and democratic leadership.

1977: After Baer’s retirement, Dr. Sidney Clearfield was the successor to the position of BBYO International Director.

1990: AZA and BBG send largest delegation on the March of the Living. First BBYO program held in Soviet Union with more than 200 Soviet Jewish teens in attendance.

1994: BBYO designated the historic and biblical Mount Cheres in Israel as a community gathering place.

2002: BBYO transitioned to independence from B’nai B’rith International to become a new and legally independent organization under the name of BBYO, Inc. It is no longer officially recognized by its former full name, “B’nai B’rith Youth Organization.”

2006: AZA and BBG deliver 10,000 signatures to the White House to end nuclear proliferation in Iran.

2008: At International Convention, the My 2 Cents for Change campaign encouraged involvement in the 2008 Presidential election.

2009: BBYO’s Stand UP campaign was launched.

2010: At August International Executive’s Conference, the “Speak UP for Israel” and “Stand UP for Each Other” Campaigns launched; the Degrees of Programming were introduced; The International Service Fund was redefined for Globalization; the Global Ambassadors Network was created and the Coalition of Jewish Teen Leaders (CJTL) was motioned into action.

By the DecadeJust after the turn of the new millennium, many changes for the B’nai B’rith Youth Organization occurred. Our Order became a legally independent entity from B’nai B’rith International in 2002 and BBYO, Inc. was established as its official new name. Several leaders from the Jewish community, such as key Jewish philanthropists, BBYO alumni, Jewish Federation leadership, and BBYO’s International Teen Presidents (the Grand Aleph Godol and International N’siah), formed a new Board of Directors to assume governance over BBYO. While traditional summer programs such as CLTC, ILTC and Kallah continue to be offered, a new slate of Israel trips and community service programs grew extensively. In 2004, BBYO launched its international teen travel program, now called BBYO Passport, and restored its historical International Leadership Seminar in Israel (ILSI). The organization also created the BBYO Panim Institute, which offers premiere service learning opportunities open to members and non-members of BBYO. During this time, International Convention also left Camp Perlman for the first time in 50 years and convened at Camp Ramah Darom outside of Atlanta, GA in February 2006, and has been held in a different location every year since. Keeping with BBG’s mission to provide a meaningful experience to Jewish teens of all ages, BBYO’s 6th-8th grade experience, now known as BBYO Connect, was reestablished in the 2007-2008 programming year. BBYO Connect positions BBYO as a ‘rite of passage’ for pre-high school teens, while promoting Jewish community involvement from pre-bar/bat mitzvah through the high school years.

In recent years, BBYO and BBG have encouraged our members to become involved with community service both in and out of the Jewish community. The 85th/65th (2008 – 2009) International Boards introduced Stand UP - BBYO’s service, philanthropy, and advocacy campaign. The 86th/66th (2010-2011) Executive Body ignited a renaissance of globalization – reconnecting BBYO worldwide and establishing new partnerships with twenty Jewish teen communities across the globe. The 2010-2011 programming year also yielded the introduction of “Speak UP for Israel”, BBYO’s campaign for Israel education and advocacy. The first decade of the twenty-first century redefined our Order. Anita Perlman’s dream to provide a meaningful experience to Jewish teens has spread across the world and shows no signs of slowing down.